Men as hunters, women as prey: the history of sexualized metaphors is depressing and long. »Baby I'm preying on you tonight / Hunt you down eat you alive / Just like animals« croon Maroon 5 in confirmation. It is no stretch of the imagination to take away from this that men have the privilege to hunt down and defeat women, like a deer or moose. As wrong as this hunter-prey metaphors are in any non-consensual scenario, recent research on early hunter-gatherer societies suggests we got it all wrong right from the start. According to archeological findings in the Americas women were just as much taking part in big-game hunting as men. Hunting huge mammals simple was an all hands on deck situation. This is a blow to the man-the-hunter hypothesis but comes as no surprise for Norwegian photo journalist Ingerid Jordal. She believes all humans to have an instinct for hunting. For her project She Hunts Jordal followed groups of female hunters into the Arctic landscapes of Northern Norway. It all started when she came across a blurry Facebook snapshot of a women posing on top of a dead animal. The women was also very pregnant. Jordal felt drawn to this image, and she had no idea why.

A.S.B: Can you talk about your fascination when first encountering this pregnant hunter? What was so fascinating about this picture?

I.J: There was some kind of contrast in this image between what we perceive as masculine and as feminine, and I was surprised and intrigued by my reaction to it. I come from Norway and was brought up in a fairly equal society. But when I saw this snapshot I thought, wow this is so cool. Very tough, very masculine. Maybe it is old-fashioned to think that way, but women give life. And here was this woman, about to give life, but she had also just taken a life. Two basal aspects – beginning and ending – were working against each other in this one picture. As a photographer I am interested in exploring contrasts as much as connections. And when I became aware of this theme I was working towards highlighting both.

A.S.B:  What is your own relationship to hunting? Did you grow up among hunters?

I.J: Coming from rural Norway I grew up with dead animals in our basement. Everyone here hunts or knows a hunter. To me hunting is not a strange thing. But I have never done it myself until I was 25. I had moved to Finnmark in the Arctic and there is really nothing you can do. So I took the test and got certified. I have a hunting license and own a gun, but I am not good at it. When I went on hunting trips I missed my camera, and I never shot anything. My philosophy is that hunting is the kindest way to gather meat. Animals standing in a barn for all of their lives have it much worse. The meat we buy in the supermarket comes from animals who suffer much more than wild animals do. They run happy and free until – bäm – they get shot. It is over so fast. I used to be a vegetarian and made exceptions only for the meat that my father shot. But I really like meat, so eventually I gave up vegetarianism.

»I don’t want my subjects to look just like any hunter. Reality is what I’m aiming for, no poster shots.«

A.S.B: Looking for female hunters on Google or social media one finds a lot of pictures of women posing in tank tops, often wearing a lot of make-up. The images you take are very different. What were you aiming for?

I.J: I too did these Google searches. When going on tur with these women I never saw anyone in a camouflage bikini. It was easy to avoid these kinds of cliches. Keep in mind, it’s Norway and it’s October, November in the mountains. You’re not going to be dressed in a onesie. It’s not happening. Often the weather is so foul that everyone is dressed in so many layers that you can’t tell if it’s a man or a woman. That’s not what I’m interested in either. I don’t want my subjects to look just like any hunter. Reality is what I’m aiming for, no poster shots. There are several pictures in my portfolio that are too perfect: beautiful autumn colors, sunshine and mountain ranges in the back. I have used some of these for a hunting magazine. But they didn’t make it into my collection. I don’t think they show reality. Some look like an ad for weapons. It is important to me that my pictures don’t advertise hunting, although that is how they work for some people. I prefer pictures with blood. Advertisement or hunting magazines hate pictures with blood. But there is a lot of blood, and there is struggle. And although I find all of that beautiful it for sure is not pretty.

A.S.B: Taking pictures is its own hunting technique. There are a lot of hunting metaphors in photography, like shooting, aiming, being on the lookout. What are the similarities and differences you encountered between hunting images versus hunting animals? 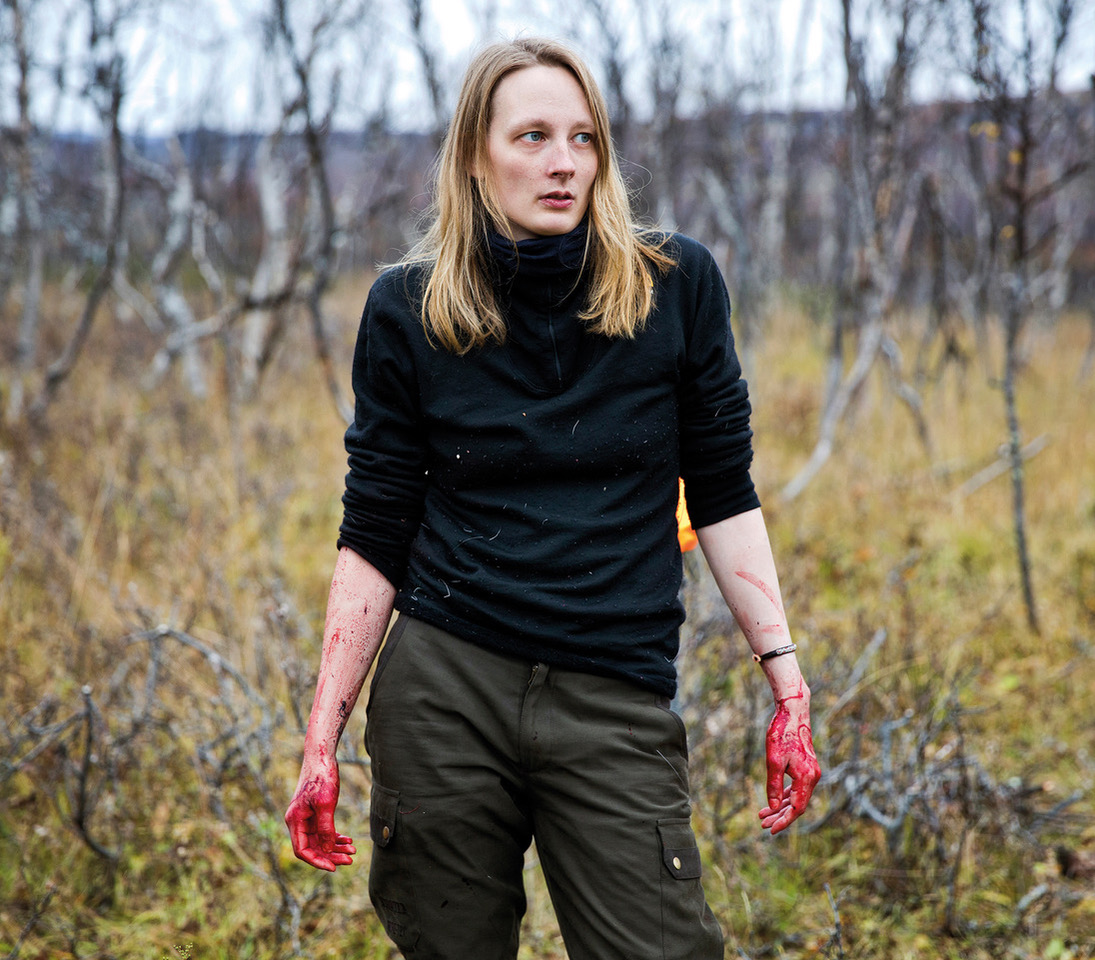 Mia from the hunting team Tikka, after butchering the moose she shot. Vestre Jakobselv in Finnmark, Arctic Norway, in 2017 © Ingerid Jordal

All the hunters told me that I should hunt with them. When they found out I had a license they said: »Why didn’t you say so? We could have fixed you a rifle.« But I don’t want that. They thought that I was a big fan of hunting and that was why I did the project. But actually that is not it. I am a big fan of this thing happening.

»These women are all kinds of things, pretty, cool and strong. But they are not these things in order to be looked at.«

A.S.B: What is this thing happening?

I.J: When you’re in a hunt and there is an animal approaching, the hunters will just not give a shit about me. I am not there for them and that is perfect for a photo journalist. They are totally into it and you get very sincere pictures with a lot of atmosphere. Sadly, we see less and less of these images in Western societies. I am a huge fan of portraying people being completely absorbed by what is happening. In a hunt things get intense and they require a hundred percent involvement. These moments are a gift because I can just observe. That is what I’m hunting for. My aim is to capture these moments when people don’t give a shit about me. Hunting is also a lot of walking and waiting and it gets boring. Then the hunters notice me a lot more and will adjust for me. But when it’s a real hunt they don’t do that. These women are all kinds of things, among them pretty, cool and strong. But they are not these things in order to be looked at. That’s not why they are there. They are there to shoot and kill something. And that is liberating for me to see.

A.S.B: Who is the women in the cover shot, with the bloody hands?

I.J: Her name is Mia and she works as a prison officer. The picture I took of her sums up everything I was trying to achieve with this project. She lives where I used to live, in Finnmark. She grew up on a farm and is very outdoorsy. She invited me to come with the all female group in 2017. It was her who shot the elk, after sitting motionless for 1.5 hours in a little river stream, almost freezing to death. It was her first time shooting a mammal. She told me she was very afraid before this hunt. Although she seems like the type of person who is never afraid of anything. She is a great hunter, calm and patient. If you want to hunt moose you have to be completely quiet and sit still. Mia used to live alone with her dogs in a house by the fjord, in the middle of nowhere. The house was so far away from the next village that she had a fox trap in her garden. She could shoot foxes out of the living room window.

A.S.B: What kind of roles do the hunters have back home, in their working and family lives? You quote one of them saying that these trips were the perfect ›husmorferie‹, holidays for housewives. What did she mean by that?

I.J: It’s a Norwegian expression back from the fifties and she was saying it with a lot of irony. She has a leadership position quite far up. Many of these women are successful in their jobs. Others come from farms. The younger ones are often just interested in hunting, not brought up in the woods by their parents. Some of them are though (laughs). The young girls from the city often feel detached from nature. And hunting is a way of claiming their place in nature. In a different way than hiking or walking does.

»People did this for thousands of years. They didn’t bake cupcakes. They hunted.«

A.S.B: Did the women reflect on what it meant for them to kill a living creature?

I.J: I always ask this question: What are your thoughts on taking a life? Most of them say they feel respect for the animal. It is not like they just want to kill. One woman told me the shooting is not the best part. When you have shot the animal, the hunt is over. Then it’s just a lot of work, butchering and getting the animal back to town. The hunt is the excitement, the struggle, the tension, the test you put yourself to. It is playing a game according to nature’s rules. When you master all the things, when you passed the test, then it is kind of over, quite abruptly. Others told me shooting is the same thing as slaughtering a sheep or pig. They are harvesting from nature, a natural thing to do for humans. And then some have said that they feel it has been a challenge. Many say they cry when it is over. They cry because they feel ashamed and proud at the same time. It’s quite contradicted but makes sense to me.

A.S.B: Do you believe participating in a killing act is teaching us something transformative?

I.J: I think it does. It gives you a more honest perspective towards life. And it shows you what has to be done in order to eat meat. And many of the hunters have told me that they barely eat meat from the store because they know what it takes. We live in a society where you don’t have to shoot anything in order to eat. But we still have this instinct within us. People did this for many thousand years. They didn’t bake cupcakes. They hunted. And you can have this instinct without being careless or lacking respect. This is how I perceive these women. Hunting gives them more respect for animals, not less.

Ingerid Jordal is a freelance photojournalist based in the west of Norway, with a passion for the deep north and Arctic region. She works both on assignment and personal projects in Norway and abroad. She specialises in photo reportage and portraiture, and give lectures on press photography.

Anne-Sophie Balzer is a journalist, researcher, writer, and admirer of all things wild. She writes essays, poetry and reportings and is a fellow at the international doctorate program (re)thinking environment at Augsburg University, Germany. Anne-Sophie’s work as a freelance journalist appears in newspapers and magazines such as DIE ZEIT and ZEIT ONLINE, ZEIT CAMPUS, Berliner Zeitung and Mare Magazin. She is an occasional contributor to DLF Kultur.